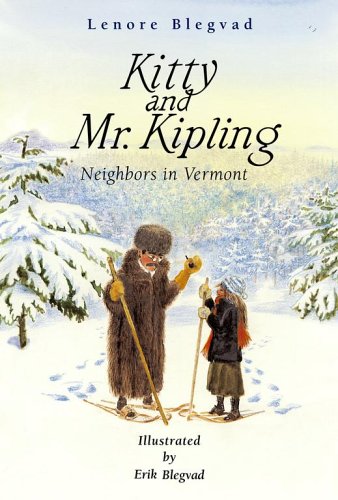 Based on true events, this fine collaboration by the husband-and-wife team ( ) opens in 1896 Vermont, as the fictional Kitty receives the two-volume , first editions sent and inscribed to her by Rudyard Kipling. The story then shifts to four years earlier, when 26-year-old Kipling moves from England to rural Vermont, where his wife grew up. He spends the mornings writing and afternoons exploring the countryside. Meanwhile, his wife vigilantly fends off a steady stream of curious reporters. Mr. Kipling does, however, open his door and heart to his eight-year-old neighbor, who shares the writer's insatiable curiosity ("Mustn't hesitate to ask, Kitty," he counsels). From the kind, playful Kipling, Kitty learns much about the ways and thinking of the world beyond Vermont; from the big-hearted girl, he discovers the workings of the New England mindset and lifestyle, so alien to him. Kitty finds the time she spends listening to Mr. Kipling's stories—which unleash her own imagination—and playing with his baby, Josephine, both warm and rewarding. But the narrative's hint of "awful things" ahead becomes a reality when the Kiplings' long-simmering feud with Mrs. Kipling's somewhat irresponsible brother, boils into a lawsuit that creates a scandal and precipitates the family's return to England. The author artfully blends fact with fiction, shaping equally credible and affecting portraits of Kipling and Kitty. Erik Blegvad's pencil drawings effectively evoke the period and depict some memorable moments in this singular friendship. Ages 7-10.