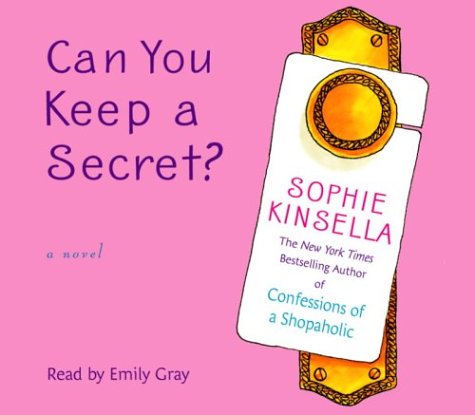 CAN YOU KEEP A SECRET?

It would be hard to imagine anyone other than Gray giving voice to Emma Corrigan, the heroine of Kinsella's hilarious new confection (after ). With her flirty British accent, Gray perfectly delivers the hysterical monologues that Emma, a marketing assistant, directs towards the handsome man sitting next to her on a turbulent flight between Glasgow and London. Emma spills intimate details about her G-string, G-spot, the fact that she's never been in love and much more. But to Emma's chagrin, the handsome man on the plane turns out to be Jack Harper, CEO of her company. Emma hopes Jack will forget all about her, but he seems bent on getting to know her, first forcing her to admit she deserves better than her boring boyfriend Conor, then convincing her that he is a better choice. Although he never seems to share his own secrets, Emma can't help falling in love with Jack and his glamorous lifestyle. But then the unthinkable happens—Jack reveals Emma's secrets on national television in front of her family, friends and co-workers. What happens next? That's a secret. What's not is that this fast-paced, fluffy audiobook goes down as easily as cotton candy and is twice as sweet.