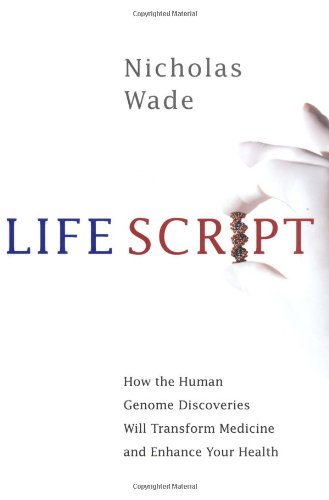 LIFE SCRIPT: How the Human Genome Discoveries Will Transform Medicine and Enhance Your Health

By now a familiar name to readers of the "Science Times" section, Wade, who has written and edited books under the aegis, here tells the increasingly familiar tale of the biologists whose race for knowledge, wealth and scientific celebrity led to the first sequencing of the human genome. His stated aim is to describe the "dawning of the genomic revolution," which represents "a new starting point for science and medicine, with potential impact on every disease." In clean prose, an evenly paced narrative economy and a welter of carefully marshaled facts, Wade hits his mark admirably. After lucid chapters on the race itself, Wade settles into the implications of its conclusion. Through genotyping, Wade recounts, doctors will be able to match drugs to patients and isolate disease-causing variant genes. Someday, Wade surmises, the scalpel could be replaced by the use of therapeutic cells and proteins, and our life spans considerably enhanced by the careful manipulation of genes. Although he dismisses most criticism as "invocations of eugenics" or "effectively luddite," Wade warns that the true dangers of genome engineering "lie in the question of what changes should be permitted, if any, other than those directly related to health." Without dumbing down the issues or clogging them with data, Wade allows readers to ponder such questions for themselves.