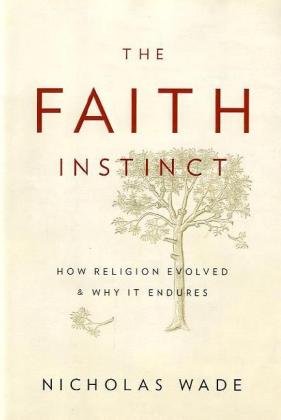 The Faith Instinct: How Religion Evolved and Why It Endures

Taking up where he left off in (2006), an engaging examination of human evolution in light of explorations in the human genome, longtime science reporter Wade deftly explores the evolutionary basis of religion. He draws on archeology, social science and natural science as he vigorously shows that the instinct for religious behavior is an evolved part of human nature because, like other human social traits that have evolved over many thousands of years, the practice of religion conferred a decided survival advantage to those who practiced it. Natural selection operates according to principles of survival and reproduction of offspring with heritable traits. Many of the social aspects of religious behavior offer advantages—such as internal cohesion—that lead to a society’s members having more surviving children. More importantly, since religions have evolved as their societies have developed, is it possible, Wade asks, for religions to be reworked so that as many people as possible can exercise their innate religious instincts to their own and society’s benefits? Sure to be controversial for its reduction of religion to a product of natural selection, Wade’s study compels us to reconsider the role of evolution in shaping even our most sacred human creations.