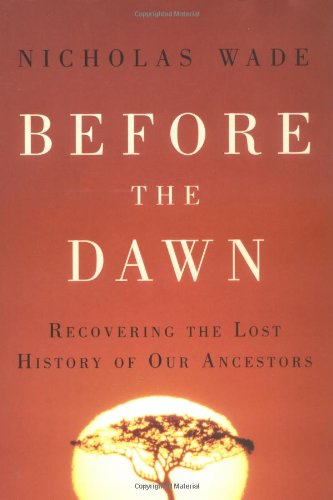 Before the Dawn: Recovering the Lost History of Our Ancestors

Scientists are using DNA analysis to understand our prehistory: the evolution of humans; their relation to the Neanderthals, who populated Europe and the Near East; and who roamed the steppes of Asia. Most importantly, geneticists can trace the movements of a little band of human ancestors, numbering perhaps no more than 150, who crossed the Red Sea from east Africa about 50,000 years ago. Within a few thousand years, their descendents, became masters of all they surveyed, the other humanoid species having become extinct. According to science reporter Wade, this DNA analysis shows that evolution isn't restricted to the distant past: Iceland has been settled for only 1,000 years, but the inhabitants have already developed distinctive genetic traits. Wade expands his survey to cover the development of language and the domestication of man's best friend. And while "race" is often a dirty word in science, one of the book's best chapters shows how racial differences can be marked genetically and why this is important, not least for the treatment of diseases. This is highly recommended for readers interested in how DNA analysis is rewriting the history of mankind. Maps.