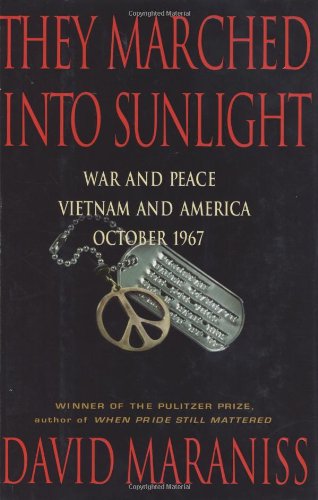 THEY MARCHED INTO SUNLIGHT: War and Peace, Vietnam and America,October 1967

Pulitzer Prize winner and bestselling author Maraniss () intertwines two compelling narratives to capture the Vietnam War at home and on the battlefield as well as, if not better than, any book yet written. The first narrative follows the soldiers of the army battalion the Black Lions, 61 of whom died in an ambush by North Vietnamese on October 17, 1967. The battle scene description is devastating, brilliantly compiled with painstakingly recreated details of the four-and-a-half-hour battle, unflinchingly drawn pictures of the damage modern ordinance inflicts and an equally unflinching record of the physical and psychological residue of battle. The second narrative centers on the October 18, 1967, riot at the University of Wisconsin at Madison when student protesters tried to stop Dow Chemical, the maker of napalm, from recruiting on campus. Here Maraniss, a Madison native and a freshman at the university at the time, successfully depicts the complicated range of motives that led students to participate in the protest: many began the day as curious observers, and the riot radicalized them against the war. The author also re-creates the sense of loss, confusion and anger of the university administrators as they were overtaken by events that would change the fundamental relationships between students and faculty. The two narratives together provide a fierce, vivid diptych of America bisected by a tragic war: a moving remembrance for those who lived through it and an illuminating lesson for a new generation trying to understand what it was all about.