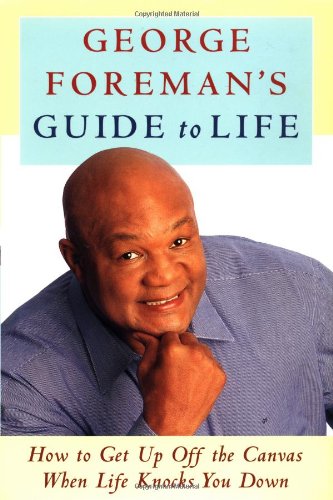 GEORGE FOREMAN'S GUIDE TO LIFE: How to Get Up Off the Canvas When Life Knocks You Down

As a two-time former heavyweight champion of the world, an ordained minister, father of 10, husband five times, boxing commentator and globally renowned corporate spokesman, Foreman (, etc.) perforce knows a lot about life, both its ups and downs. In this slim but wise book, he shares his advice on how to handle life's challenges, drawing on the trials and triumphs of his own 54 years to concretize his words. The titles of the book's 28 brief chapters reveal its thrust and tone: "Be Yourself"; "You're Never Too Old to Fight"; "Say Something Nice," etc. There's little advice here, in other words, that strays from common sense and that many life-advisers haven't expressed before. What makes the book valuable are its simplicity, its directness and the vast pool of personal experience that Foreman calls upon. In the chapter "Why Life Isn't Fair," for instance, Foreman harkens back to his days in the ring: "I was hit in the face by Joe Frazier, knocked out by Muhammad Ali, and knocked down a couple of times by Ron Lyle before I got up and won. All the fights had one thing in common: When they were over, I could hardly remember the pain.... It's the same when you hit rough times. Don't let the disappointment and pain lodge inside." In the chapter "Think Before You Speak," he relates how he learned to curse from Sonny Liston and points out that, "These days, you'll be at a dinner party and most people will ask, 'Do you mind?' before they pull out a cigarette. But no one ever asks, 'Mind if I swear?' " With its hard-won lessons and congenial tone, this book can be of real use to many, particularly teenagers; short and sweet, it packs a real punch. B&w photos throughout.