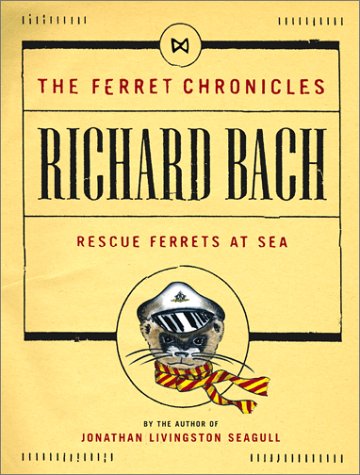 Bach returns to critter fables with the first two installments (three more are due over the course of the next year) of , creating an imaginary world based on the exploits of ferrets who have abandoned their utopian world to aid the human race. is by far the better book, mostly because Bach sticks to a coherent, straightforward plot with a story that is touching and satisfying (despite the high treacle level). Bethany Ferret is the seagoing heroine who dreams of being part of the fleet that rescues animals lost at sea, and she fulfills her dream when she makes it through officer training. The icing on the cake is a project in which she restores her battered rescue vessel, but her superiors throw her a curve when they place rock star–cum–journalist Chloe Ferret on board to chronicle the adventures of the crew. But Chloe proves to be up to the difficult job; after winning the crew over, she even provides a dramatic assist when she helps recover some data from an explorer ship. , concerning a cargo airline that shuttles food and toys around the country, is clumsy and muddled by comparison. The protagonists are two heroic pilots, Stormy and Strobe, who are destined to meet during a series of flights between California and Seattle. But the headstrong would-be lovers keep screwing up the meeting, forcing a pack of ferret angels to lend an assist by messing up the weather in a series of jumbled scenes that take the luster off the inevitable happy ending. Bach's fondness for flying shines through in the airborne book, and he wears his love of animals and his fondness for sappy endings on his sleeve in both novels. But he never manages to bring his animal conceit to life, failing to project the unique, simple innocence that made such a huge commercial success 30 years ago.