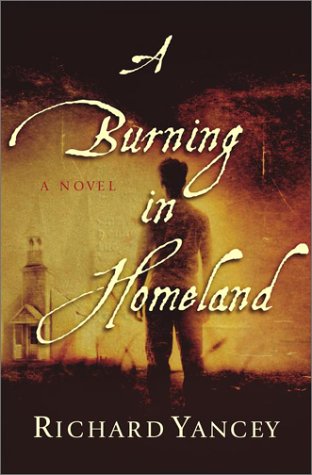 A BURNING IN HOMELAND

When a parsonage goes up in flames in 1960, memories of a 20-year-old murder are stirred up in the small town of Homeland, Fla. Yancey's powerful if somewhat glum Southern gothic debut is a Capote/McCullers/Foote cocktail with a twist. Three voices tell Yancey's story. Robert Lee "Shiny" Parker, wise beyond his seven years, provides much-needed humor as he describes the invasion of his home by Mavis and Sharon Rose, the wife and daughter of the town's Baptist preacher, who has been seriously burned in the conflagration. "Sharon-Rose.... She was three years older than me so I didn't know her very well, until that summer she moved in with us, because God burned her house to the ground and me and her got engaged through no fault of my own." Meanwhile, 38-year-old Halley Martin, just released from prison, thinks back on the day 20 years ago when he murdered his rival for the affections of Mavis Howell, the daughter of an orange-grove plantation owner. "It's what we remember, not what we do, that truly damns us," he says. In prison, he was befriended by a visiting Baptist preacher, Ned Jeffries, who saves Halley's life, then steals the woman he loves. Mavis's letters to Halley in prison offer a third perspective on the story, explaining how she came to marry Jeffries while still loving Halley. Yancey is an honest, uningratiating writer, whose characters are grittily convincing, though rarely charming. Troubled, strident Sharon Rose, in particular, is a striking creation, and Halley is a marvelously flawed protagonist. Moving along at a seductive pace to a religiously charged finale, the novel maintains its curious, uncompromising tone to the very end.