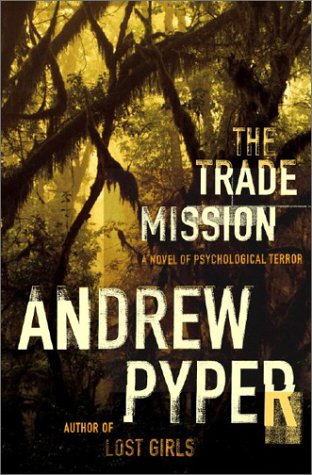 The ad copy on the back of the proofs for Pyper's second novel (after ) points out just what's right, and what's wrong, with the book: " is a gripping, ingeniously plotted thriller with an underlying literary interest in social criticism...." The novel does grip, and while its plot—two young North American software entrepreneurs and their colleagues visiting Brazil are kidnapped by extortionists in the jungle, then escape for a chase—isn't quite ingenious, it's clever enough; so far so good. The problem is the "underlying literary interest in social criticism." One supposes the copywriter mentioned "literary" as a pointer to Pyper's prose, which is lush and suffused with psychological insight, but which too often draws attention to itself at the expense of the story. The "social criticism" is relayed through character studies—the kidnapped are extremely complex creations, as is their Canadian translator, a woman rapidly approaching middle age, who narrates; her probings into the differences rendered by wealth, class and age among the kidnapped, and between them and their captors, are perceptive and fresh. The novel takes a serious wrong turn, though, when the kidnapped are harbored by a tribe of Yanomami Indians. While giving the narrator plenty of chance to comment on the degradation of the rain forest and its peoples by industrial interests, this turn feels contrived; it leads to the kidnapped ingesting a native hallucinogen, which exacerbates the murkiness of the narrator's perceptions and results in a storytelling muddle that Pyper straightens out only through further contrivances. Pyper is a talented stylist and a masterful psychological portraitist, but his new novel is a slog.