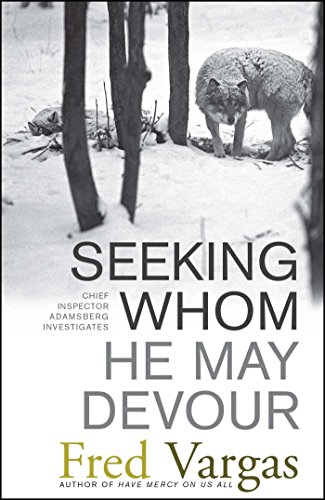 Seeking Whom He May Devour: Chief Inspector Adamsberg Investigates

Admirers of quirky, atmospheric whodunits will revel in Vargas's creative second mystery featuring Chief Insp. Jean-Baptiste Adamsberg (after 2005's ). A series of savage attacks on sheep leaves the countryside near the French Alps gripped in superstitious fear, as locals suspect that an unnatural creature resembling the legendary Beast of Gévaudan is responsible. The inspector, keeping a low profile to protect himself from a would-be assassin, is drawn into the mystery after the killer turns to human prey, starting with a woman who has suggested that a werewolf was at large. While the abundance of fair-play clues (and the absence of a large pool of suspects) will enable most experienced genre readers to anticipate the solution, the unusual cast of characters and off-beat humor should help Vargas win new fans.