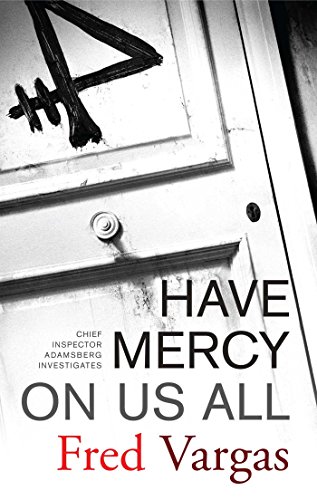 Have Mercy on Us All

A bestseller in France, Vargas's U.S. debut presents a riveting blend of biothriller and historical cryptology: it takes a close look at the threat of bubonic plague to modern-day Paris. Joss Le Guern is a merchant seaman who, following the wreck of his ship and the end of his career, has strung an improvised mailbox onto a tree and taken to reading aloud local news left for him there thrice daily in the streets of Paris; he sees himself as a modern town crier. When odd, apocalyptic warnings begin coming in regularly, intrigued listener Hervé Decambrais does some research and finds they match medieval texts that predicted the coming of the Black Death. Meanwhile, backward 4s begin appearing on apartment doors. At first, Chief Inspector Adamsberg (a comically forgetful, yet thoughtful and decisive character) and his deputy dismiss the markings as graffiti, but when they discover that the symbol was once used in parts of Europe to protect people against the plague and correlate with Joss's reports, the detective work intensifies—though not fast enough. This exciting and careful whodunit is well-executed, page-turning crime fiction—until its surprise but somewhat anticlimactic ending.