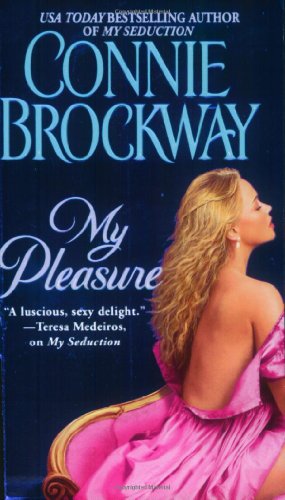 Brockway's uneven second Regency in her Rose Hunters trilogy (after ) suffers from a plot whose twists too often come from nowhere, but the attraction between Miss Helena Nash, lady's companion, and Ramsey Munro, swordsman extraordinaire, has an undeniable appeal. Helena, sister to Kate (introduced in the previous book), finds herself pressed into service as a go-between for Flora, the addlepated niece of Helena's employer, and Oswald, a bankrupt gambler who clandestinely married Flora despite being unable to keep her in the style to which she's accustomed. Helena passes notes between the lovers, secretly relishing the opportunity to drop her icily correct demeanor for a bit of adventure. When she runs into trouble on a dark walk at Vauxhall, Ramsey steps in to rescue the maiden in disguise. Helena's determination to help the irritatingly stupid Flora and Oswald grows dull quickly; scenes in Ramsey's fencing salle are far more engaging. Despite the sexual tension between hero and heroine, the love scenes are marred by decidedly unsexy lines like, "He closed his eyes and mated her with his tongue" or "[she paused] at his flat, leathery male nipple to touch her tongue experimentally to the hard kernel at its center." Brockway has many followers, and the trilogy is attractively packaged thus far, but the pleasure promised in this novel's title is slight indeed.