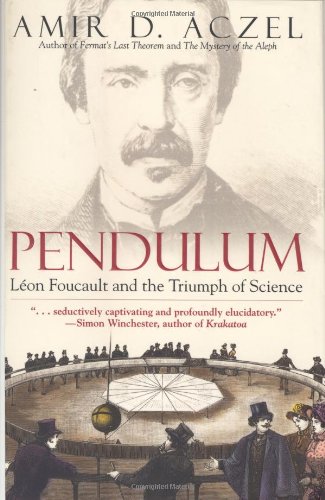 PENDULUM: Léon Foucault and the Triumph of Science

Aczel, one of our best science popularizers (; ; etc.), now recounts the triumphs and struggles of the French physicist Léon Foucault (1819–1868), whose eponymous pendulum presented the first tangible proof of the earth's rotation. Aczel follows Foucault from his beginnings as a medical student and a science journalist covering the meetings of the august French Academy of Sciences to his installation as the official physicist attached to the Imperial Observatory in Paris and his belated election to the Academy of Sciences, finally overcoming the resistance of those who saw as an outsider this genius with no formal academic training. Foucault is portrayed as a wide-ranging thinker, fascinated with questions from the speed of light to the construction of the first gyroscope, but at the center of this account is his 1851 invention and demonstration of his famed pendulum. The author's transitions from narrative to scientific exposition can be a bit rough, but every time the pace begins to drag, he veers off in a new direction, drawing connections between Foucault's work and broader scientific, political and philosophical trends and themes. Aczel's material is so intriguing that one is inclined to forgive his habit of pursuing tangents. The reader is left with a choppy yet fascinating survey of Parisian science during the Second Empire and Léon Foucault's grudgingly rewarded place in it. Illus.