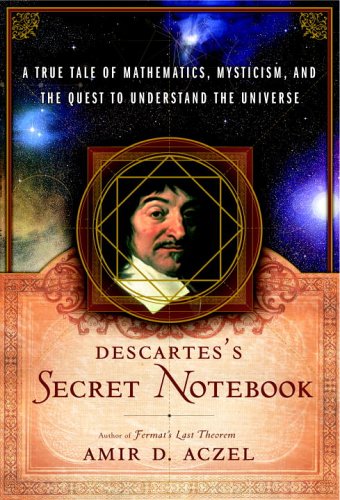 Descartes' Secret Notebook: A True Tale of Mathematics, Mysticism, and the Quest to Understand the Universe

What Aczel did for mathematician Fermat ( ) he now does for Descartes in this splendid study about the French philosopher and mathematician (1596–1650) most famous for his paradigm-smashing declaration, "I think; therefore, I am." Part historical sketch, part biography and part detective story, Aczel's chronicle of Descartes's hidden work hinges on his lost secret notebook. Of 16 pages of coded manuscript, one and a half were copied in 1676 by fellow philosopher and mathematician Leibniz. For him, Descartes's inscription of the cryptic letters "GFRC" immediately revealed his association with the occult fraternity of the Rosicrucians—Leibniz was also a member. The notebook also revealed to Leibniz a discovery made by Descartes that would have transformed mathematics. As Aczel so deftly demonstrates, Descartes's mathematical theories were paths to an understanding the order and mystery of the cosmos, and he kept the notebook hidden because it contained a formula that—because it supported Copernicus's model of the solar system—Descartes feared would lead to his persecution by the Inquisition. Aczel lucidly explains the science, mystery and mathematics of Descartes, who has never been so lively as he is in the pages of this first-rate biography and social history.