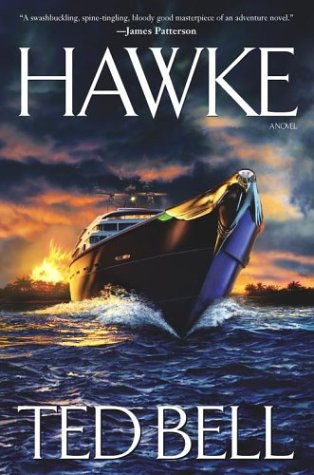 Bell's action-adventure novel actively courts comparisons to Ian Fleming's James Bond novels, even touching down on Thunderball Atoll in the Bahamas, in a nod to Fleming's 1961 . Bell's hero is Alex Hawke, a jet-set business mogul who does "highly secret freelance work for the governments of the United States and Britain." Thirty years before the story begins, seven-year-old Alex Hawke watches from a hiding place as his mother and father are slaughtered by three modern-day pirates. The adult Hawke, descendant of the famous English pirate, Blackhawke, owns the finest of the world's goods, makes love to the most beautiful women and defeats the world's most heinous villains. He is, in short, a cartoon. When his friend and ex-lover, Consuelo de los Reyes, the beautiful and foul-mouthed secretary of state, asks him to save America with a difficult and exceedingly dangerous piece of derring-do, he leaps at the chance. The assignment involves a cabal of Cubans who have deposed Castro, bought themselves a secret submarine from the Russians and are preparing to launch 40 nuclear missiles at the United States. Hawke assembles an arsenal of cool weapons and exotic machinery, calls in a squad of deadly ex-SEAL anti-terrorist pals and saves the world. Along the way, he avenges his parents' brutal murder. Bell's first effort, , was a well-received pirate book for boys. This novel is a pirate book for adult boys. It's a fast, fun read, but the elaborately constructed homage to the master—Fleming and the inimitable Bond—tips over into unintentional parody more often than it should.