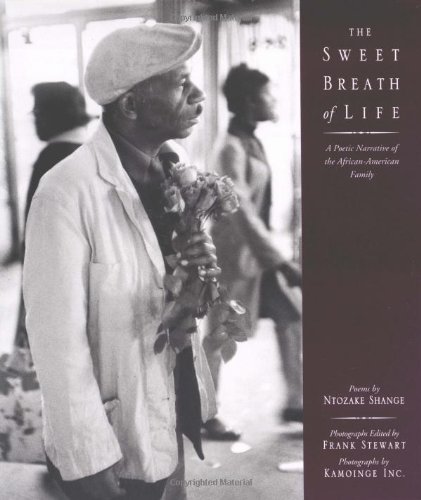 THE SWEET BREATH OF LIFE: A Poetic Narrative of the African American Family

Poem follows photo in this 7" x 8-5/16" collection of 135 b&ws taken by the Kamoinge Workshop, a group of African-American photographers founded in 1963. Ostensibly of the African-American family, the photos are not necessarily constrained to what one typically thinks of as "family shots"; rather, they show women, men and children both together and separately, as much outside as inside, as much in large social groups as with "nuclear" families. The effect of this is to expand the definition of "family" to include "location"—the street furniture of sidewalks, stoops and cars becomes as essential to human interaction as dinner plates and birthday cakes. The poems, by playwright and poet Shange ( ), are most often literal interpretations of the images, tracing facial expressions and body postures in text. While Shange's gritty, contracted style complements the unadorned and intimate images, at times a less narrative explication of the images would have allowed a little breathing space between mediums—the close interrelation is sometimes claustrophobic, with a "story" pre-empting independent appreciation. It's certainly easy to understand the urge to overexplain one's family, but in these cases, the power and humanity of the images are self-explanatory.