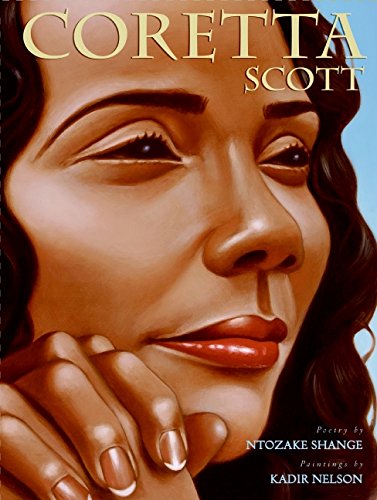 Nelson's ( jacket portrait of Coretta Scott, monumental and tender at the same time, sets the tone for this intimate picture biography. The artist's full-bleed paintings, powerfully molded and saturated with color, depict crucial moments in Scott's life: the morning when a “white school bus/ left a/ funnel of dust” in Coretta's face as she walked five miles to school; her marriage to Martin Luther King Jr., “two minds attracted in prayer,” their faces joined in double profile; the March on Washington, a mass of humanity around the Washington Monument, viewed from the air. Shange's ( ) rhythmic lines and formal syntax roll like waves—“over years/ learning and freedom/ took hold of Coretta's soul/ till she knew in her being/ that the Good Lord intended freedom/ for the Negro”—carrying readers on a soul-stirring ride through Coretta's coming of age in the Civil Rights movement and her time as King's partner in it. “Singin' always singin',” Shange ends; Nelson shows the couple at the head of a line of marchers, and then, on the final page, in tight close-up, their faces patient and strong. Ages 4–9.