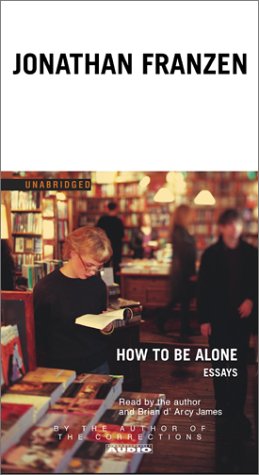 HOW TO BE ALONE: Essays

"In publishing circles, confessions of self doubt are widely referred to as 'whining'—the idea being that cultural complaint is pathetic and self-serving in writers who don't sell, ungracious in writers who do." This quote, taken from his essay "Perchance to Dream," and later reworked for this collection as "Why Bother," was written before Franzen tasted huge success with his bestselling novel . Fans of that work will be intrigued by the elements from Franzen's personal life that run parallel to those of the characters in . However, Franzen's adroit cultural criticism, albeit a personal one, is the root of this collection of essays. Hearing such subjective work read by the author himself adds an air of authenticity. It also satisfies a curiosity as to what that voice actually sounds like. This audiobook's editors satisfy that curiosity, but also make the wise choice of not letting Franzen read the entire collection. While his reading is sincere, his delivery, unlike his text, is passionless and dry. Fortunately, the lion's share of the essays is read with much more moxie by James. He gives these intelligent, thoughtful and provocative pieces more dramatic punch than Franzen can.