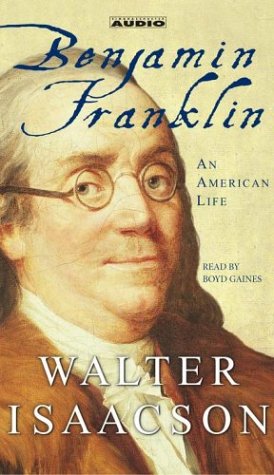 Most people's mental image of Ben Franklin is that of an aged man with wire-rim glasses and a comb-over, flying a kite in a thunder storm, or of the spirited face that stares back from a one-hundred-dollar bill. Isaacson's () biography does much to remind us of Franklin's amazing depth and breadth. At once a scientist, craftsman, writer, publisher, comic, sage, ladies' man, statesman, diplomat and inventor, Franklin not only wore many hats, but in many cases, did not have an equal. The most intriguing thing he invented, and continued to reinvent, according to Isaacson, was himself. Three-time Tony winner Gaines has an obvious interest and affinity for the material. His delivery of Isaacson's factual yet fascinating biography is informative and friendly with an instructional yet casual tone, like that of a gregarious narrator of an educational film. All things considered, Gaines is a good match for the material. He has the authority to deliver historical facts and the enthusiasm to keep listeners interested.