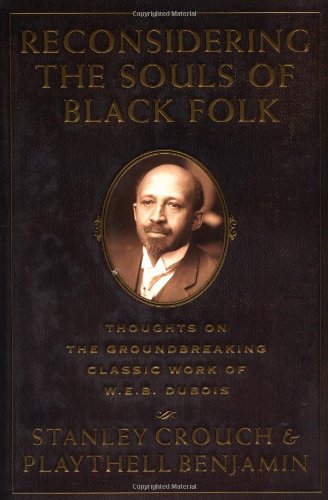 RECONSIDERING THE SOULS OF BLACK FOLK: Thoughts on the Groundbreaking Work of W.E.B. DuBois

Pioneering black sociologist and public intellectual W.E.B. DuBois set the terms of debate about race in 20th-century America in . In this vigorous dialogue, two contemporary black intellectuals assess DuBois's ideas and legacy for the centenary of his most famous work: his evocation of the "double consciousness" of African-Americans in a racist society; his advocacy of the black "talented tenth"; and his challenge to Booker T. Washington's nonconfrontational program of downplaying black civil and political rights in favor of economic advancement. In his two long and generally appreciative essays, historian and journalist Benjamin fills in the educational and intellectual milieu that influenced DuBois (especially the Romantic German nationalism he absorbed during a stint in Berlin), celebrates his nuanced, pathbreaking explorations of black culture and psychology, and defends him against charges of elitism by present-day writers. The much shorter responses by playwright and critic Crouch () are more critical: he castigates DuBois for his embrace of black separatism, Marxism and Pan-Africanism. (That the latter two "sins" take place entirely outside of doesn't seem to bother Crouch.) Crouch spins DuBois as a betrayer of the Enlightenment principles of equality and democracy that he thinks should be the philosophical foundations of blacks' struggle for freedom. The authors' vigorously opinionated styles (Benjamin attacks Cornel West for his "pretentious mumbo-jumbo" and Adolph Reed for being a "pugnacious misanthrope," while Crouch launches blistering tirades against "greasy crackers" and Communists alike) can be wearying, and the result is that this dispatch, while often provocative, just as often has little to do with the seminal book that gives Crouch and Benjamin their title.