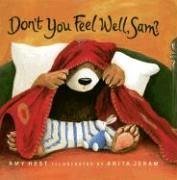 In this followup to the team's , bear cub Sam comes down with a cough—"Hck, hck!" he hacks—and is doted upon by his unflappable mother. If Sam can steel himself to take his cough medicine ("Tastes ," he says, before his mother even pours out the syrup. "I have a cough"), then Mrs. Bear will reward his bravery by letting him stay up to watch the snowfall. "Sam leaned back on his mama's soft belly, and it wriggled while she talked," writes Hest after the deed is done. "The little fire glowed and the kitchen was warm." Jeram nestles tiny Sam into Mrs. Bear's voluminous girth (sweetly playing up the contrast in their sizes, as she did so effectively in the first book), while the thickly textured ocher walls of their snug home seem to stand guard against the frigid night. As in the earlier title, Hest's soothingly rhythmic and repetitive prose, Jeram's burnished-hued acrylics, and the unwavering affection between Sam and his mother conjure up the essence of familial warmth. Being sick may have its downside, but the author and illustrator emphasize the extra coddling and indulgences that come with feeling under the weather. Ages 2-6.