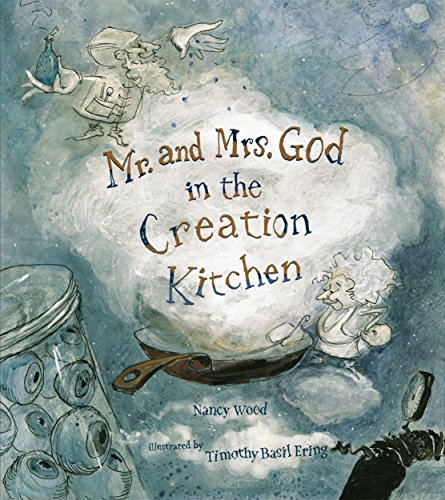 Mr. and Mrs. God in the Creation Kitchen

Wood's ( ) irreverent recipe for a lively picture book about Creation begins with a married pair of doddering chefs (no strangers to smart remarks or the occasional argument) in their specially equipped Heavenly kitchen. As pots, pans, boxes of bones, canisters of eyeballs and "an oven big enough to roast a star" float about, Mr. and Mrs. God flit hither and yon, concocting various life forms. A large, hot, giant orb rolls out of the oven and becomes the sun. Mrs. God molds and bakes "a fat lump of dough" naming it Earth, inspiring Mr. God to whip up "some creatures to go with it." His monstrous first attempts—dinosaurs—are deemed a mistake, so Mr. God flings a red-hot coal down to them creating a "Ka-Boom!" effect. As the chefs fashion human forms out of leftover clay, Mrs. God wonders, "What are they?" Her husband replies, "Who knows?" Though Wood's lighthearted story posits what-if scenarios that some readers may find entertaining, fantasy and Bible story are an uncomfortable fit here and not likely to please readers of either genre. Ering's (illustrator of ) predominantly gray ink–and-acrylic paintings, however, have an alluring, frenetic, mad-scientist energy. Young readers will have fun poring over the details of the kitchen equipment and the various creations. Ages 5-up.