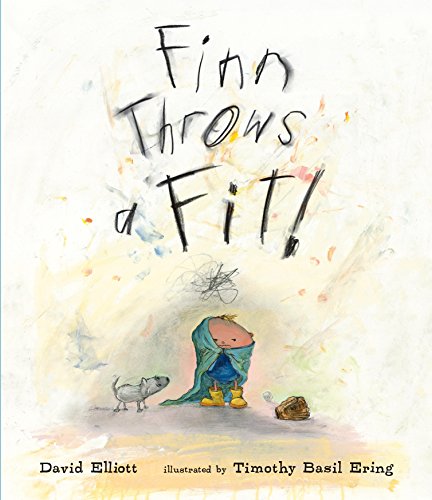 Droll text and exuberant illustrations render a toddler's tantrum in all its magnificence. “Finn likes peaches. Usually,” the book opens, as tiny egg-shaped Finn sits on a chair, dangling his yellow boots and holding his peach. “But today, Finn doesn't like peaches. Today, Finn doesn't like anything.” Finn's parents attempt to placate him as he glowers; his mother, kneeling, proffers peaches, his father holds out toys—even the dog grins. No dice. Finn's tantrum roils the house (“Tidal waves sweep through the living room. Hurricanes rage in the dining room”) until, suddenly, it's over (“It lasts until it doesn't”). Elliott ( ) and Ering ( ) operate like the left and right hands of a single comic mind; each tongue-in-cheek line of text is deftly countered with raw charcoal scrawls, wild strokes of paint and crazed scribbles. Small readers will giggle at the realization of their angry feelings—complete with rippling lengths of toilet paper, floods of tears and flying crockery—while parents will blanch at the brilliant exposition of the power their children hold over them. Ages 2–4.