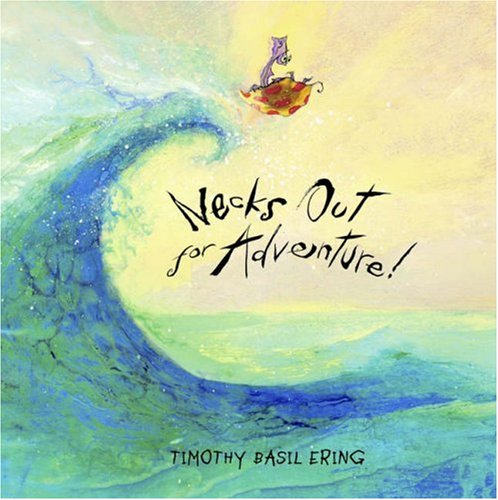 Necks Out for Adventure! The True Story of Edward Wiggleskin

In this strange concoction about a daring clam, Ering ( ) recommends a maverick approach over groupthink. Ering doesn't call a clam a clam, though. He uses the term “wiggleskins” for his purple-gray protagonists, snug in the mud with their french fry–shaped heads protruding. “They all lived by a simple system: Necks out to eat and... necks in to hide.” But after the other mollusks get scooped up by a grotesque creature with “two huge filthy feet,” young Edward takes “Necks out for adventure!” as his motto, squeezes out of his shell and saves his relatives from becoming paella. In the acrylic-and-ink illustrations, Ering slathers the seashore in slimy greens and foamy oyster-grays. His underwater tableaux and beachscapes, while edgy, go easy on the eye—he washes the page in textures that look like the breaking of waves and seafoam, whereas his on-land scenes, crowded with detail, can be hard to decode. As in , he invents an odd hero who will leave some readers shaking their heads. By the same token, brave Edward is weird enough (and semitransparent, with his digestive system visible through his skin) to charm coastal kids and those with an off-kilter sense of humor. Ages 4-7.