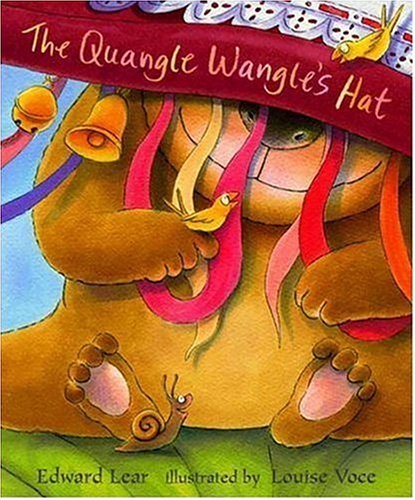 Lear's assemblage of whimsical creatures in this breezy poem rival those in his "The Owl and the Pussycat." Voce ( ) pictures the Quangle Wangle Quee as a furry creature whose face is obscured by a flamboyant burgundy chapeau, and whose body resembles a cuddly brown koala. He loves his perch on a Crumpetty Tree but lacks companions. "For his Hat was a hundred and two feet wide,/ With ribbons and bibbons on every side." Only a thin smile is visible on the creature beneath the broad-brimmed hat, fringed in bells and baubles. Then two canaries seek permission to build their nest on his headgear, soon followed by a cavalcade of real and imaginary beasts: "And the Golden Grouse came there,/ And the Pobble who has no toes,/ And the small Olympian bear,/ And the Dong with a luminous nose." After settling in their nouveau chateau, the creatures revel "by the light of the Mulberry moon." Lear's poetry has lost no charm or magic over the decades, but the watercolor-and-ink renderings of the animals (all share wide-eyed, insomniac facial expressions) suffer from sober, straightforward interpretations. The Quangle Wangle Quee portrayed here wears a permanent grin, and what should be a dramatic emotional shift from his initial solitude to an overabundance of new friends never gets its due. The verses' inherent whimsy is somewhat betrayed by the rather static, albeit cutesy illustrations. Ages 4-7.