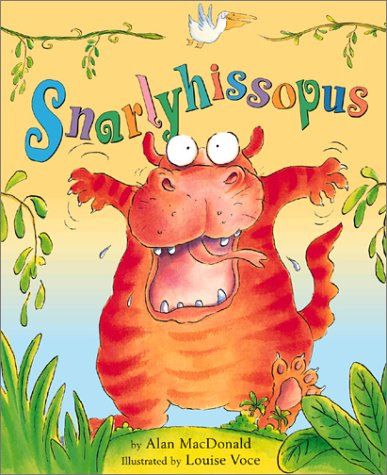 When Pelican meets her first hippopotamus, the colossal purple creature seems friendly enough. But as she relates the encounter to Monkey, Pelican mangles the animal's name into "Spottyhippomus." British artist Voce translates the misnomer into an image of the hippo with protruding yellow bumps all over its violet body: " 'Watch out,' said Monkey [to Zebra]. 'There's a huge, ugly creature heading this way... a Woppabigamouse!' " By the time the news passes through the jungle grapevine, the mammal has morphed in the animals' overheated imagination into a fearsomely orange "Snarlyhissopus"—"a terrible, roaring, clawing, wild-eyed monster [who] is going to gobble us all up," in the words of the comically misled Giraffe. A misguided act of defense shows the animals just how mistaken they were. MacDonald's () silly variations on Hippopotamus (including the surefire laugh-getter "Drippalslobbermouth") good-naturedly prove that the time-tested game of "Telephone" endures. And Voce's wide-eyed, genially goofy animal characterizations and not-too-scary monster conjectures make the most of the animals' misfires. Ages 3-7.