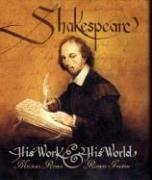 Shakespeare: His Work & His World

Rosen's () compelling text and Ingpen's () dramatic paintings invite readers into the "extraordinary and dangerous times" in which the Bard wrote his famous plays. The narrative and design divide into distinct sections ideal for browsing. To set the stage, Rosen introduces "A Plot!" and details how, in 1598, to avoid paying their landlord, actors covertly pulled down the timber from the Curtain theater to reconstruct the Globe (a portion of which Shakespeare owned) on the opposite side of the Thames. Most chapters begin with engaging, chatty rhetorical questions (relayed, however, in a sometimes distracting typeface) such as "What's So Special About Shakespeare?" and "So How Does Someone Stay That Famous?" Some metaphors, such as comparing Shakespeare's plays to a "house full of many amazing rooms," become a bit strained, but the narrative benefits from liberal quotation of Shakespeare's plays. Rosen effectively sets the historical context and reconstructs and imagines the events and circumstances of Shakespeare's life, while also demonstrating the surprising and pervasive extent of his linguistic legacy. Ingpen's atmospheric paintings evoke the romance of the era and capture the pageantry of the plays. A strong and worthy companion for readers exploring Shakespeare. Ages 12-15.