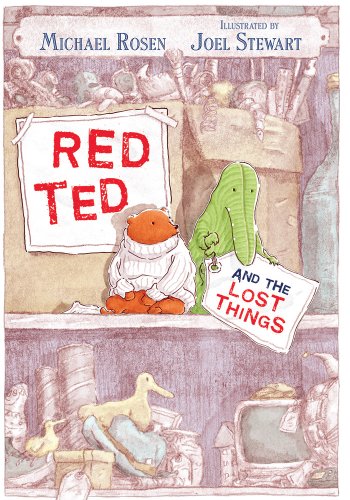 Red Ted and the Lost Things

For this story of a lost teddy bear's journey home by former British Children's laureate Rosen, Stewart ( ) provides subdued but wonderfully imaginative backdrops. Left on the train, Red Ted is deposited in a lost property office so crammed with forgotten possessions that he and his new friend Crocodile are nearly lost on the shelves. As Red Ted and Crocodile search for Stevie, Red Ted's owner, Stewart draws city streets, bridges, bus stops, and downpours as cloudy gray scenery, like remembered dreams. By contrast, Red Ted, Crocodile, and Stevie (when they finally find her), appear in color and in sharp focus; they jump out from their foggy surroundings. Rosen lets Red Ted and Crocodile languish for a time (“It's no use crying. She can't hear you,” Crocodile points out), but restores them to Stevie in a gentle but triumphant finale. In an especially charming addition, Stevie proves she can hear the unspoken thoughts of the stuffed animals and a cat they have befriended. Readers will ponder the tangents and possibilities of this funny-sad story long after they put it down. Ages 3–up.