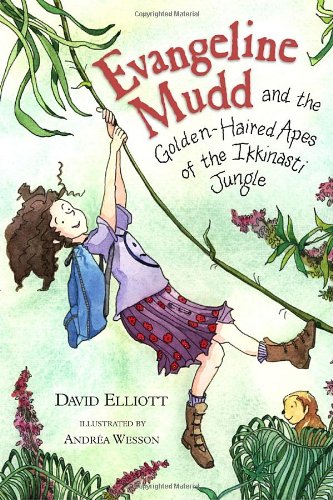 EVANGELINE MUDD: And the Golden-Haired Apes of the Ikkinasti Jungle

Elliott's ( ) pleasingly far-fetched caper centers on a girl whose primatologist parents have previously dedicated their lives to studying the golden-haired apes that inhabit the remote Ikkinasti Jungle. When their daughter Evangeline is born in New England, they decide to raise their child exactly as these "agreeable" apes raise their young. This leads to some kid-pleasing scenarios: Evangeline can hold a sandwich in one foot while taking a sip of milk with the other, "all without spilling a single drop." She is delighted when her parents teach her to "brachiate" ("If you don't know the meaning of that word, don't worry. You'll learn all about it in the next chapter"), or swing ape-like from trapezes hung from the ceiling of their home. When the girl is eight, her parents excitedly scoot off to the jungle to investigate a new family of golden-hairs, leaving Evangeline in the dubious care of her father's second cousin, twice removed, whose mink ranch and fur factory attract the ire of animal-rights activists while his crazed wife, a former ballerina, practices incessantly in her tutu. Dr. Aphrodite Pikkaflee, an eminent primatologist, comes to Evangeline's rescue, whisking the girl off to the jungle to search for her missing parents. Their madcap adventures will appeal to kids with a taste for silliness, as will Wesson's ( ) sprightly illustrations. Elliott's wry asides to readers and his penchant for goofy names add to the tale's good-natured nonsense. Ages 7-10.