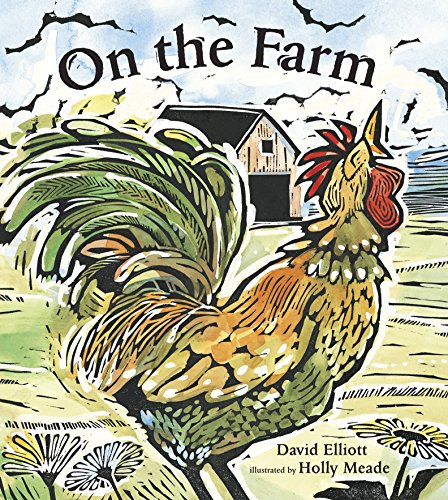 Like the vibrant rooster on this oversize book's jacket, Meade's ( ) colored woodcut prints are so bold they seem to crow at the reader. Leaves look bigger than life, and each chicken scratch in the barnyard dust leaves a strong, black line. Elliott's ( short, simple poems often seem overwhelmed by the pictures, which feature animals that stare intently at the reader, as if their morning activities were being interrupted by someone with a camera. Taking a roster of the farm residents, the poems include the occasional striking image (the pig has a tail “as coy as a ringlet”), and more frequently comment on the animals' obvious characteristics (the cow “makes milk/ standing/ grazing./ Abra-/ cada-/ bra!/ She's/ utterly/ amazing!”). As brief as they are, often just a sentence or two, the poems talk to both adults and preschoolers. A comment about the turtle's “fossil head” will be of less interest to children than the idea that “in [the turtle's] house,/ it's always night.” While some illustrations are stiff and anthropomorphic, overall this old-fashioned farm stands in for an idyllic existence, a time and place where the bees “tell their story,/ sweet and old.” Ages 3-5.