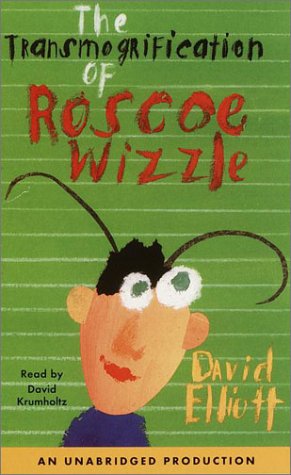 THE TRANSMOGRIFICATION OF ROSCOE WIZZLE

Film actor Krumholtz's (; ) halting reading rhythm and affected, overly exuberant intonation take much of the zing out of Elliott's wacky fantasy about a boy who suddenly finds himself turning into a bug. Ten-year-old Roscoe Wizzle considers himself pretty normal, even though he lives in a pink house and his oblivious parents, who make the same thing for dinner every night (tuna noodle surprise or instant mashed potatoes), would seem odd to anyone. When popular hamburger chain Gussy's moves into the neighborhood and his parents allow him to eat there every night, Roscoe believes he's the luckiest kid on earth. That is, until he starts metamorphosing into a praying mantis–like insect. With the help of his best pal Kinshasa Rosa Parks Boomer, Roscoe unravels the cause of his Kafka-esque predicament. Elliott spins Roscoe's adventures into a breezy, funny whodunit with a happy ending—the spirit of which seems lost on this recording. Krumholtz never quite conveys the subversive humor or quick pace of the material. Ages 7-up.