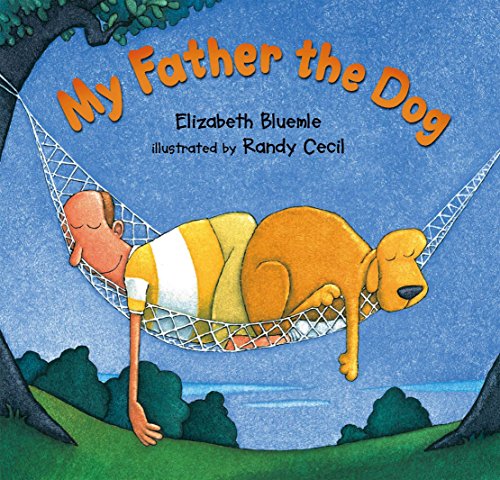 My Father the Dog

My father pretends to be human, but I know he is really a dog," begins bookseller Bluemle's appealingly flippant debut. Backing up her assertion, the girl narrator explains that, like her dog, her father fetches the newspaper, likes to ride in the car with the breeze on his face, and "growls when you startle him out of a nap." A couple of manners-bending comparisons will elicit snickers from kids, as parent and pooch (discreetly) use a tree "for a quick pit stop" and the two sit on the couch looking deceptively nonchalant as the youngster notes, "When he toots, he looks around the room like someone else did it." Depicting these human and canine characters in various parallel positions, the art comically captures the similarities between man and pet. Cecil ( ) nicely alters the pacing with oval-shaped illustrations that give way to full-bleed spreads (e.g., for "If you throw a ball, he'll chase after it," Dad and dog cover the backyard to make a catch), and his textured brushstrokes work effectively as blades of grass or as fibers on the couch. A final comment, which the girl makes while patting her father's head at bedtime, ends the book on a note at once sweet and sassy: "My father is loyal and thinks we're the best family in the world... which is good, 'cause Mom says we can keep him." Young dog lovers will lap this up. Ages 4-7.