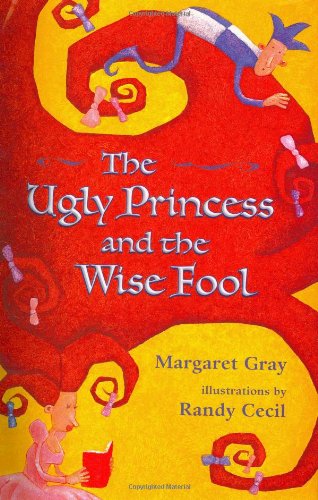 THE UGLY PRINCESS AND THE WISE FOOL

This determinedly perky first novel satirizes fairy tale conventions, sometimes wittily but often thinly. "A very long time ago, when all the countries you've ever heard of were in different places on the map," Gray begins invitingly, "a princess was born who was not beautiful.... The whole kingdom was in deep shock about it." Buck-toothed and skinny, freckled, with cropped hair, Rose also has a "wonderful character" and a "quick mind." Readers will know right away they are in for a lesson about beauty being in the eyes of the beholder, and when the author introduces a second story line—wherein the king has banned wise men and one of the wisest of them, Jasper, finds employment as a fool at court—readers will also know who that beholder is going to be. The author jazzes up the inevitable with a mild diversion or two. When a particularly handsome prince comes a-courting, Rose's fairy godmother grants Rose's ill-considered wish to be "more beautiful than anyone has ever been." Then, when Rose (predictably) repents, she and Jasper implore the fairy godmother to reverse the spell. Unlike such tweaked fairy tales as Gail Carson Levine's or Francesca Lia Block's , this story is played chiefly for laughs, not deeper meanings. Cecil's () b&w art similarly concentrates on obvious humor. Ages 9-up.