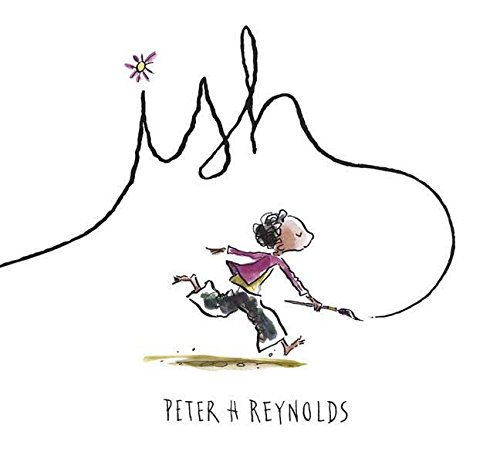 As simple yet stimulating as Reynolds's , this tale centers on another youngster questioning his artistic ability. Spot illustrations portray Ramon as a cheerful boy who loves to draw "anytime" (he draws in bed), "anything" (he paints pictures of trash cans) and "anywhere" (readers will giggle at the sight of him perched on the toilet, drawing pad on his lap). But his self-confidence plummets when Ramon's older brother laughs at his attempts to draw a vase of flowers (" is ?"). After months and crumpled attempts at trying to make his pictures look "right," the frustrated child puts his pencil down, announcing, "I'm done." His younger sister runs off with one of the discarded drawings and when he chases her to her bedroom, he discovers (in a moment reminiscent of ) she has created a "crumpled gallery" of his work. Pointing to his attempted rendering of the flower vase, the girl calls it "one of my favorites." When Ramon complains, "That was to be a vase of flowers," she supportively responds, "Well, it looks vase- !" Ramon then feels "light and energized. Thinking ish-ly allowed his ideas to flow freely." Reynolds's minimalist pen-and-ink illustrations feature subtle washes of watercolor and ample splashes of emotion and humor. A tidy lesson in the importance of thinking—or drawing—outside the box and believing in one's own abilities despite others' reactions. Ages 5-up.