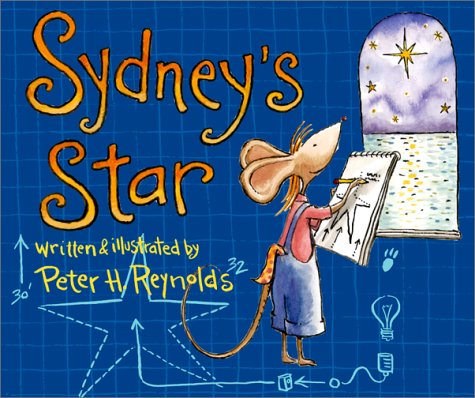 Reynolds's () snappy pictures and breezy narrative contribute equally to the humor of this tale introducing a spunky young mouse. Inspired by a star in the night sky, clever Sydney (who "made brilliant birdhouses, charming cheesecakes, and all sorts of wonderful inventions") decides to build her very own remote-controlled star. The crowd cheers when she launches her creation at the school science fair, where she hopes to land the prize of a telescope, but "suddenly the remote control made a rude burping sound, and the star started floating away." Crestfallen, star-less Sydney makes her way home, walking along a beach in the rain. Meanwhile, out at sea, her star comes to the rescue of a lost boat captained by a woman scientist, guiding it through the storm to the safety of shore. Rendered in watercolor, gouache and tea, the artwork captures the comically mercurial moods of this endearing heroine, quite the shimmering star herself. Ages 4-8.