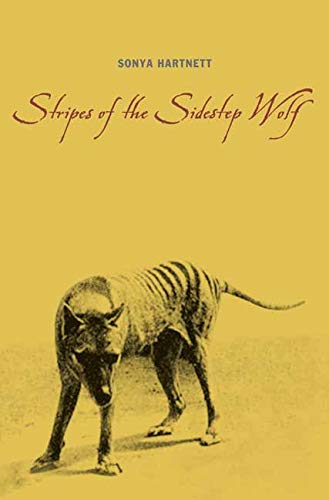 STRIPES OF THE SIDESTEP WOLF

Living in a bypassed Australian town with people "sunk by the dislocation" wrought by a new highway, hardworking 23-year-old Satchel O'Rye is coping as well as he can with his overshadowing mother, Laura, a nurse, and his fanatically religious father, William. Years earlier William suddenly stopped running the local gas station and began creating religious miniature watercolors, becoming increasingly odd and threatening. Laura's longsuffering nature simply serves to "[draw] the bars around [Satchel] tighter." Even his long-time friend, Leroy, finds work out of town, leaving Satchel with Leroy's outcast sister, Chelsea, and his own beloved dog, Moke, as his only companions. In a rather forced subplot, Satchel spies a strange animal in the mountains, and Chelsea speculates that it is a presumed extinct Tasmanian tiger. The day Satchel accidentally hits Moke with his car and then fights back against his father's rages, he again spots the animal and becomes determined to begin his own journey. Published in Australia in 1999, Hartnett's novel is challenging and may be ultimately less rewarding for readers than the ones that followed ( ; ). Yet the book is characterized by the same graceful prose, unusual protagonist (though somewhat older than is typical for young adult audiences) and keen sense of place that carry the story to its hopeful conclusion. Ages 12-up.