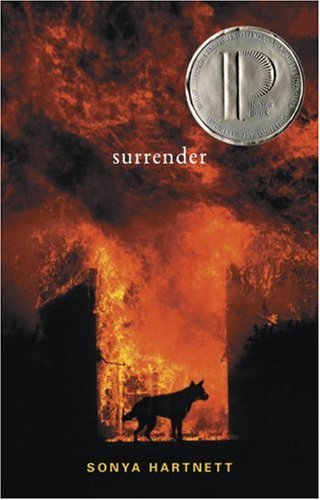 In another eloquently written, heartrending novel, Hartnett ( ; ) plunges readers into the story of a young man facing the end of his tormented life. Through flashbacks and shifts in narrative voice, 20-year-old Anwell's recollections of the events that have brought him to this point slowly and painfully come to light. As a child, his distant and careless parents gave him the responsibility of looking after Vernon, his mentally disabled brother, and a terrible mistake in judgment results in Vernon's death. Anwell, now referring to himself as Gabriel, is paralyzed by grief and imagines his mother, in particular, is "making an island" of him. His only friends are a feral child named Finnegan with whom he makes a Faustian pact, and his dog, Surrender. As Finnegan begins to menace the town with arson, Gabriel must stand by and watch until he realizes he has in fact surrendered his soul. The pace of the novel is almost excruciatingly measured until the heart-stopping conclusion that, in retrospect, is manifest throughout the tale, attesting to the quality of the storytelling. Readers are left to grieve for an angel child, compassionately portrayed, engaged in a tug-of-war with evil and despair. Hartnett's novels may never reach the widest audience of young readers, but those who find her work will be moved by her gifted writing and the powerful changes her characters undergo. Ages 14-up.