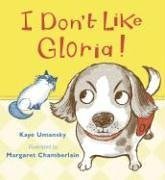 Calvin is not a happy pup. His young owner has adopted a Persian cat named Gloria, and the fluffy feline has usurped all the attention. As the girl fusses over Gloria, Calvin grumbles, "Nobody remembered my walk today. ." In keeping with Umansky's deadpan prose, Chamberlain ( ) pares down the details to focus on character dynamics. The pudgy, neglected hero's big, round eyes flash with indignation and hurt. Author and illustrator smartly forego an ending with hugs and kisses all around: instead, the final pages find Gloria and Calvin achieving détente when yet another new pet, this time a brown bunny, arrives on the scene. "I still don't like Gloria, and Gloria doesn't like me," says Calvin. "But at least we agree on one thing. We don't like Jeffrey!" Youngsters will enjoy the directness of words and pictures, and nascent readers may well be able to tackle the text—especially with the humorous scenes as clues. Ages 3-6.