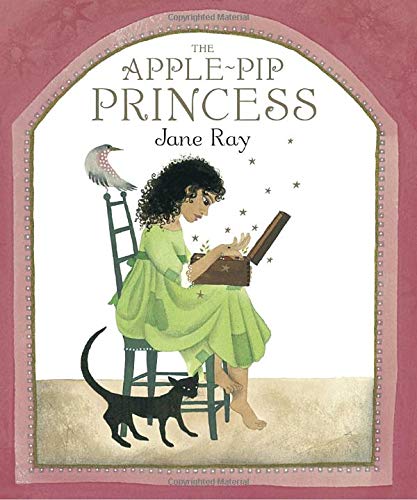 Lyrical language and enticing gold-embellished illustrations distinguish Ray's otherwise predictable original fairytale. Resonating with echoes of King Lear and the Bible, her story is grounded in the traditional elements of the fairytale: three princesses, seven magical objects from nature, a kingdom saddened and bleak after its beloved queen's death and an aging king who gives each of his daughters seven days and seven nights to demonstrate which is most worthy of reigning after him. The two self-absorbed eldest erect lofty monuments that pay homage to themselves, but the youngest, “little and shy and quite ordinary” (and too aptly named), Serenity, is inspired by an apple pip (“seed” to American readers) that, along with a lot of hard work and a little magic, helps her transform the desolate kingdom into a warm and blossoming community. Ray's extensive experience is apparent in her well-balanced use of text and art to create a magical, yet earthy, mood and even pacing. She fills many pages with intricate, multi-faceted images, and these spill over with rich details; she also enlivens several of her customary, quasi-naïve paintings with smoothly and strategically deployed digital art. The dark-skinned, possibly African princesses nod at multiculturalism, while the happily-ever-after ending reaffirms the importance of community and the environment. Ages 3-7.