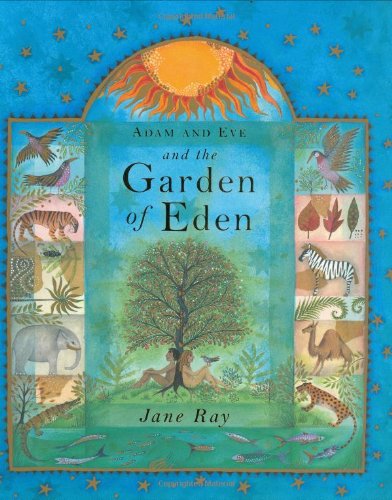 ADAM AND EVE AND THE GARDEN OF EDEN

Inspired by creation myths from around the globe, as well as visits to British environmental education center, the Eden Project, Ray ( ; ) infuses her picture-book vision with a tone of openness and universality befitting a story that encompasses all the peoples and living things of the world. After God created a mist that watered the dusty, lifeless earth, He formed the first man "out of the clay of the newly watered earth," begins this tale. Adam and Eve live happily in Paradise among the luscious plants and aided and befriended by countless beasts. But their time in Eden is of course cut short by their defiance of God, set in motion by the serpent's temptation. The key elements here will be familiar to readers of many faiths and cultures. However, Ray's intricate and elegant paintings help set this volume apart. Trees blooming with precise green leaves and fragrant with ripe colored fruit serve as the perfect lush backdrop. Throughout, the artwork is accented with gold paint, carefully crafted borders and such collage-like components as maps and sheet music. Starry skies, rolling hillsides and playful animals further convey the initial serenity of the setting. God appears on several pages as a watchful eye, or pair of eyes, carefully monitoring the proceedings. Though some readers may object to Adam's and Eve's decorative body paint or one image that exposes Eve's naked breast, Ray's work embraces a sense of discovery and the lessons learned from disobeying God's word. Ages 5-up.