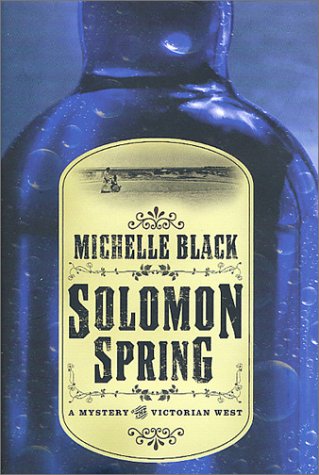 Credible and engaging characters, particularly the fearless and feisty heroine, Eden Murdoch, together with a well-paced, suspenseful plot, make for a fine historical adventure yarn in this sequel to Black's (2001). In Kansas in 1878, the Cheyenne are facing starvation since the Bureau of Indian Affairs has failed to send them the food the government promised. When Eden's true love, Brad Randall, who's the Commissioner of the Bureau of Indian Affairs, can't persuade his superiors to take action because of budget cuts, he decides to go West to see the situation for himself. Ironically, Eden, who hasn't seen Brad in years, heads for Washington to get his help to prevent a dastardly land developer from desecrating the Cheyenne's sacred spring, famous for its healing properties, by bottling the water and selling it. Eventually, their paths cross, but Eden runs into a major distraction—she learns that the infant son she presumed died years before in a Cheyenne raid on a wagon train has survived, raised by a local family. His late stepparents have left him a legacy, which her predatory ex-husband, Lawrence Murdoch, wants for himself. When Lawrence turns up in an alley with a bullet in the back of his head, Brad stands accused of his murder. Some mystery fans may be disappointed that the murder plot occupies only the book's last third, but other readers won't mind, finding too much else to enjoy.