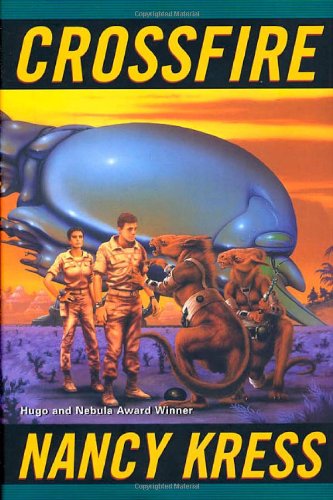 In this far-future novel of planetary colonization and alien first contact, Hugo and Nebula Award–winner Kress () offers a satisfying thought experiment in science and philosophy, despite a slow start, relatively stock characters and prose less lyrical than her usual. Jake Holman, founder of the Mira Corporation, leads 6,000 private citizens in flight from a troubled Earth to the planet Greentrees, where the expedition gets caught in the crossfire between two alien races: the Furs, DNA-based humanoids who first settled the planet; and the Vines, sentient plants who arrived after the Furs, their deadly enemies of long standing. Shipley, the leader of 2,000 Quakers, sympathizes with the Vines, while his estranged daughter, Naomi, sides with the Furs as victims of Vine bioengineering. Various philosophies, notably Libertarianism as extolled by Jake and New Quakerism, vie with one another. Fans of serious SF will enjoy this tale of bravery, travel, adventure, and personal and social crisis, though the inconclusive ending may annoy some readers, whether or not there's a sequel.