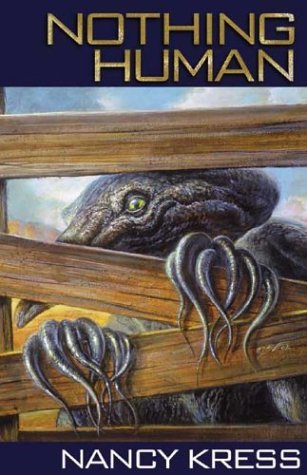 Nebula and Hugo winner Kress explores the personal and social repercussions of a hard-science idea—manipulating genetics to try to compensate for ecological catastrophe—while delivering some refreshingly unlikable aliens out to save humanity. Lillie, conceived via in vitro fertilization, falls into an inexplicable coma when she reaches puberty. Other children suffer similar symptoms. Relief is tempered with fear when the children wake up and announce that they bear a welcome message from aliens called the pribir. In the resulting hysteria, Lillie and other pribir-altered children are brought to a secure military compound, where the pribir step up their messages. Lillie volunteers to go aboard the pribir ship for more schooling, where she discovers that the pribir are masters of genetics but little else. When the children return, although only seven months have passed for them, 40 years have passed on Earth. A lack of focus due to the many points of view, a lengthy time span (three generations of children, two described in detail) and the children's failure to use any of the genetic info they've learned on the alien ship will annoy some readers, but others will appreciate the central question raised by this thought-provoking novel: When humanity has destroyed itself and must be remade in a new image, does that mean we're not human any more?