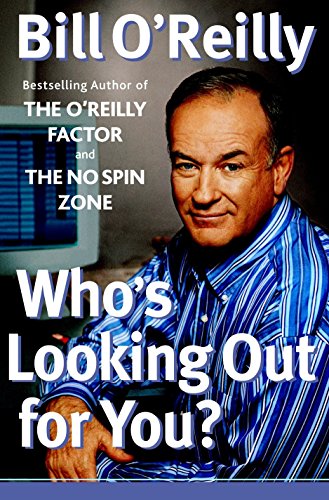 WHO'S LOOKING OUT FOR YOU?

The tough-talking, no-spin anchor of offers his many fans another no-holds-barred excoriation of the usual suspects—but also, surprisingly, some others. In his latest, the bestselling author () scrutinizes the forces at play in the lives of ordinary Americans, seeking to answer the question in the title. His conclusion: not the U.S. government; not the media; not the Catholic bishops ("elderly white men who have spent their lives playing politics and currying favor with the conservative zealots in the Vatican"). Other offenders include "antipolice minority 'leaders' "; Hollywood moguls who put profit before public morality; lawyers eager to make a buck on the back of taxpayers and the justice system itself— and the list goes on. But this is not an exercise in complaint; in fact, it is the opposite. This surprisingly personal book gets even more personal in the last two chapters where O'Reilly provides examples of his own blunders and vulnerabilities on his path to success. In the last chapter, entitled "Here's to You," O'Reilly counsels his readers: take care of your mind and your body; read books; exercise; forgive yourself; be independent and practice tolerance. While he at times falls into cliché and overly simplistic analysis, he manages to pull off an inspirational guide to life's most basic quandaries. O'Reilly has found a niche and continues to capitalize successfully on it. He is able to package conservative ideas so that they are palatable to a broader audience, and despite his confrontational, some might say merciless, style, he makes his readers and viewers feel that he is looking out for them.