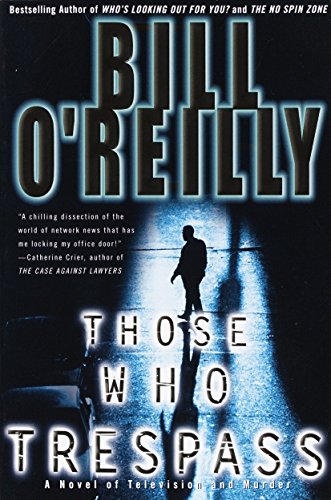 THOSE WHO TRESPASS: A Novel of Television and Murder

Before he hit bestseller lists with , and , O'Reilly penned a whodunit. This apolitical and entertaining novel, a re-release of his 1998 debut, may surprise his many fans. Galumphing prose doesn't prevent O'Reilly from squeezing in a gruesome murder by page six; a few dozen pages later, there's another. It's 1994, and someone is killing off TV news executives from the Global News Network and other outlets. Most troubling to "intense" Tommy O'Malley, the detective assigned to this media frenzy of a case, is one particular link: the murders have been meticulously executed, leaving neither witness nor evidence. Top suspects are former GNN correspondents Shannon Michaels and David Wayne; both had been abruptly fired, and both were at Martha's Vineyard when the first murder occurred there. Hot on the gory trail is crime columnist Ashley Van Buren, who complicates the case even more when she falls for both O'Malley Michaels. Ashley steadfastly believes in Michaels's innocence, but O'Malley isn't buying it, and his growing affection for Ashley might be clouding his judgment. The plot is simplistic and the characters veer toward stereotype (the Irish rogue, the crafty newsmen, the doughnut-eating cop), but the novel engages despite its flaws. Readers must be patient when O'Reilly lards in background information about tertiary characters, but they'll be rewarded with an outrageous ending that's at least as gruesome as the murders described along the way.

Those Who Trespass Who's Looking Out for You?