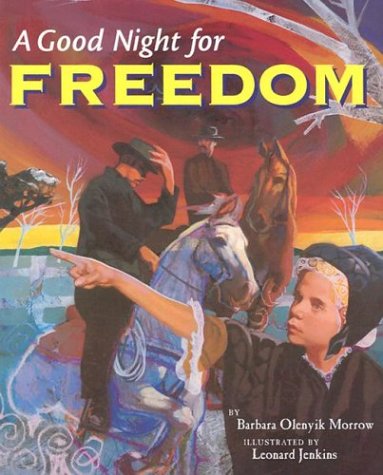 A GOOD NIGHT FOR FREEDOM

Loosely based on events that occurred in 1839 Indiana, this gripping tale opens as Hallie, who sells butter to neighbors, leaves a delivery in the cellar of the house owned by Quakers Catharine and Levi Coffin (who is considered by many to be president of the Underground Railroad, as stated in an author's note). There Hallie encounters two girls who can only be runaway slaves—the first she has ever seen. As the startled child races home, slave catchers on horseback tell her to give her father a notice offering a reward for the return of the "Negro girls." Confused, she asks Pa about the situation in general terms. He responds that while he doesn't like slavery, those who help runaways break the law, exposing themselves to stiff fines as well as harassment: "We're not meddlin'." Hallie then visits Levi Coffin, who says, "It is right to listen to thy father.... But thou has a conscience, child." How she follows that conscience makes for a thoroughly satisfying denouement. In her first picture book, Morrow creates an insightful narrative with many trenchant moments. One of the runaway girls says she plans to work and earn "buckets of coins." Hallie, who has just announced she's buying red ribbon with her butter money, asks, "What you fixin' on buyin'?" "Mama," replies the girl. Jenkins ( ) meshes the real and abstract, and the drama is heightened by his juxtaposition of lifelike characters in somber costumes against backgrounds that feature graphic patterns in wild colors. Ages 4-8.