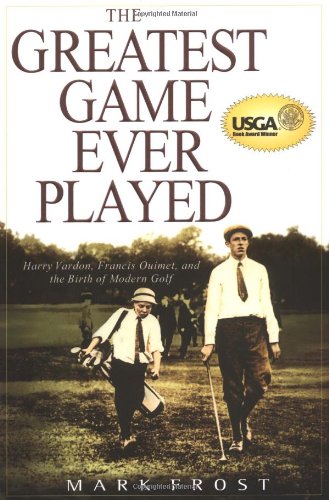 THE GREATEST GAME EVER PLAYED: Harry Vardon, Francis Ouimet, and the Birth of Modern Golf

This first nonfiction effort by Frost, who is a novelist (), television producer () and scriptwriter (), deftly tells the story behind the legendary 1913 U.S. Open, in which Francis Ouimet, a 20-year-old golf amateur from Massachusetts, shocked the genteel golf world by defeating British champion Harry Vardon, the most famous pro golfer of his time and the inventor of what today is still considered the modern grip and swing. Frost knows he has a good story and manages to touch on all the right elements of the plot: Ouimet and Vardon not only represent two different social worlds and two different generations, but also share a number of key personal facts and traits. Ouimet was "the boy-next-door amateur, young and modest and free from affectation," while Vardon was the consummate professional whose record of six British Open victories has never been matched. Yet Frost superbly shows how both shared a steely drive to succeed that helped Vardon overcome a long bout with tuberculosis and Ouimet to overcome a working-class background in which golf was seen (especially by his father) as a wealthy man's game, the perfect example of the evils of capitalism. Frost beautifully weaves history into his narrative, clearly showing the long-term impact this duel had on the game and how it helped propel the U.S. Open into the arena of world-class golf. Frost's final chapters on the last two rounds of the 1913 Open have all the page-turning excitement of a blockbuster novel.