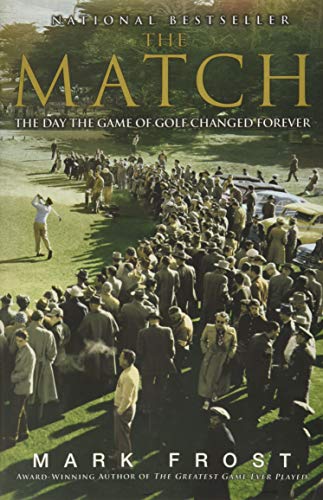 The Match: The Day the Game of Golf Changed Forever

In 1956, millionaires Eddie Lowery and George Coleman made an off-the-cuff bet on a golf match and inadvertently set up one of the sport's most climactic duels; “this one casual game has become the sport's great suburban legend.” Frost ( ) diligently covers the two pros slightly past their prime, Ben Hogan and Byron Nelson, who squared off against two top amateurs, Harvie Ward and Ken Venturi. It happened “in the last hours of Hogan's playing career, and ten years after Byron had left the stage,” but at the near pinnacle of the amateurs', whose personalities couldn't have been more diametrically opposed (Venturi the classic up-and-comer, and Ward the inveterate playboy who performed hungover on two hours' sleep). The match itself, scrupulously teased out by Frost for maximum drama, is less interesting than the people involved and the historical backdrop. The match happened near the sport's great cusp, as it transitioned from something for amateurs to a professional career, from a pastime for wastrel aristocrats and entertainers (and Bing Crosby, with his annual booze-soaked Clambake charity matches) to a mainstream suburban obsession. Frost has a penchant toward the florid, but as he writes, “Because he was Ben Hogan, and it was just past twilight, and his like would never pass this way again,” he captures an elusive magic in this improbable matchup and what it meant for those who played and witnessed it.