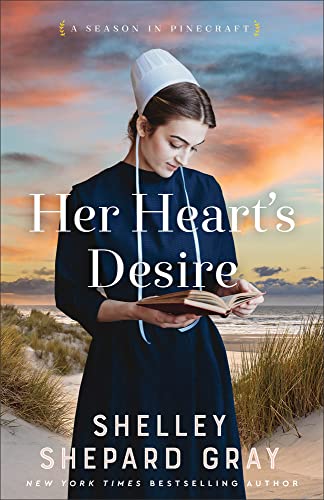 Gray (A Perfect Amish Romance) launches the A Season in Pinecraft series with this lighthearted romp. Since childhood, Mary Margaret Miller has always felt different—unpopular and shy, she’s been targeted by bullies since grade school, and characterizes herself as a textbook “wallflower”: “a girl who... stands on the sidelines and watches while everyone else does things.” In an effort to become “someone new,” Mary, now 20-something, escapes her hometown of Trail, Ohio, for a getaway in the Amish vacation town of Pinecraft, Fla. On the bus, she meets two fellow young Amish women, Lilly and Betsy, who’ve felt similarly excluded throughout their lives; the three vow to turn over a new leaf. At the inn in Pinecraft, Mary encounters Jayson Raber, a carpenter with “steel-blue eyes,” and an attraction sparks. Soon thereafter, Mary’s childhood tormentor Esther Lapp, also looking to take a break from Trail, arrives at the inn, and is eager to make amends; Mary attempts forgiveness, sensing “her heart... opening up at long last.” She’s convinced her life is looking up, until she discovers that Jayson may be hiding some secrets. Gray skillfully sketches a sympathetic cast of characters who will endear themselves to readers, and though the plot offers no real twists, Mary’s quest for self-acceptance proves affecting. This heartwarming series has potential. (Jan.)
close
Details

Fallout
Fallout
Carrie Stuart Parks
This propulsive thriller from Parks (Woman in Shadow) follows a small-town art instructor who must face her past to stop a murderer. Sam Williams is miraculously unscathed after Continue reading »

Heirlooms
Heirlooms
Sandra Byrd
Four women discover that family comes in many forms in this gorgeous saga from Byrd (Lady of a Thousand Treasures). In 1958, Helen Devries, the widow of a Navy lieutenant, Continue reading »
chevron_right